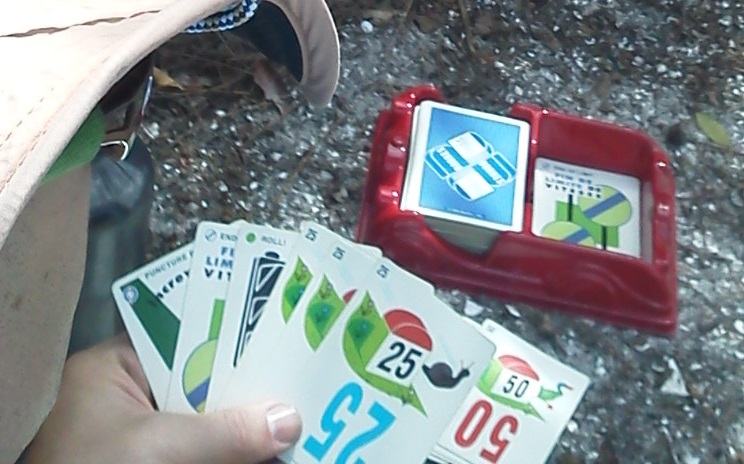 This past campout Sean introduced me to an old card game 1000 Bornes.  This game has existed since 1954 and goes by many names, and there is even a Cars Lightning McQueen edition.

The object of Mille Bornes is that the players are in a road race.  I know, we went kayaking to Travestine Island to getaway from the city.  And now Sean wants me to play a game about cars racing to a mythical finish line.  Never the less, the game is fun and it is easy to see why people are still playing it after its orginal published date.

Mille Bornes is played with a special deck of cards.  After dealing out six cards we took turns playing distant cards.  Granted there are also hazard, remedy, and safety cards. Each hazard is corrected by a corresponding remedy, and is actually prevented from happening in the first place by a corresponding safety.  Occasionally, Sean slowed my progress by giving me a flat tire.  I then would set up a speed limit against him.  I ran out of gas, and he had an accident.  There is a bit of strategy

For more details and other exciting links to board games check out BoardGameGeek.com

Often I am asked “why take a class” when retailers, people, and electronic media give information away for free. There is a lot of misleading, bias, and misinformation that can confuse and cause harm. A class allows for guided discovery and opportunity to practice skills without causing damage or harm to oneself.

My goal is to share the love and knowledge of the outdoors with others. I focus on you. Information can be lost in large groups and often there are questions left unanswered. Having a personal understanding of our local and unique parts of Florida enables me to customize a class to a student’s needs.

I can use the knowledge, training, and certifications I earned, and the school of hard knocks to enhance a fun learning environment for the new and experienced student. Being outside is a dream, passion, and means of relaxation for all.